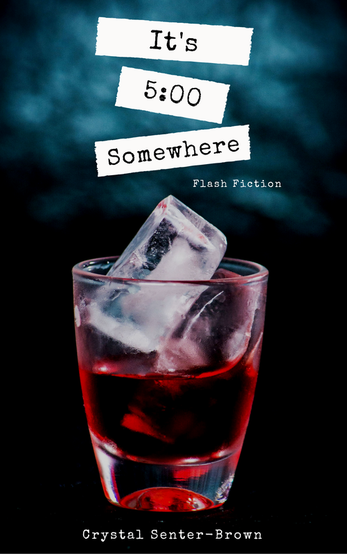 The last time I saw my father, he was drunk.

​My last memory of him was seeing him unsteady on his feet as he hugged a young, red-haired woman who was not much older than me.

That was ten years ago.

Now, I am in an ocean-front hotel suite in my hometown, passing the time until his wedding.

My hotel room’s dark, heavy curtains are pulled shut, but I can hear the waves crashing against the boardwalk right outside my window. I can also hear children laughing. I imagine they are skipping along the beachfront with their parents.

​ as they skip along the beach. I know I should open the curtains and enjoy the view, but I can’t move from the bed. A bottle of scotch has been my companion since I arrived here late last night, and I am finally numb. I haven't had a drink in years, but I had to do something to ease the knots I've had in my stomach since I got my dad's joyful, emoji-heavy text message late last week.

I actually thought the message was a joke! This wasn’t just anyone’s dad. This is MY dad, the definition of “rolling stone”, deciding to get married.
He’s been divorced from my mom for ten years (separated for many years prior to that) but you wouldn’t know they were separated if you watched how my mom carries on sometimes. She still wears her wedding rings and she still goes by “Mrs. Raine”. When I asked why she didn’t go back to her maiden name after they officially divorced, she said she didn’t want people at my school asking why we had a different last name than she did.

I graduated from college eight years ago.

When I got the “Gus! I’m getting married! You gotta come back to Blue to see me get hitched!” text four days ago, I almost didn’t respond. My first thought was: Who taught my dad to text?

My second thought was: Will she be wife number 3? Or four? I lost track years ago.

It’s easy to lose track of my dad’s love interests, especially when they all look, act and dress the same. He prefers them to be very young (no older than twenty-five), in tip-top shape, and not very bright.

And if they’re a natural redhead? Well, that’s certainly a bonus in my dad’s eyes.

Honestly? I never thought my dad would get married again. He even said so himself a few years ago when he threw his sweaty, chunky arm around my shoulder and said: “August, promise me you won’t ever get married.”

When I asked him why, he swallowed the rest of the whiskey in his glass and said

Except the food is better in jail.”

I don’t know how I’m supposed to feel right now. Should I just suck it up and pretend to be happy for him? So much time has passed since the last time we were even in the same room.

Dad would care, I’m sure of it. So I’m gonna get myself together.

​Right after I have one last drink.