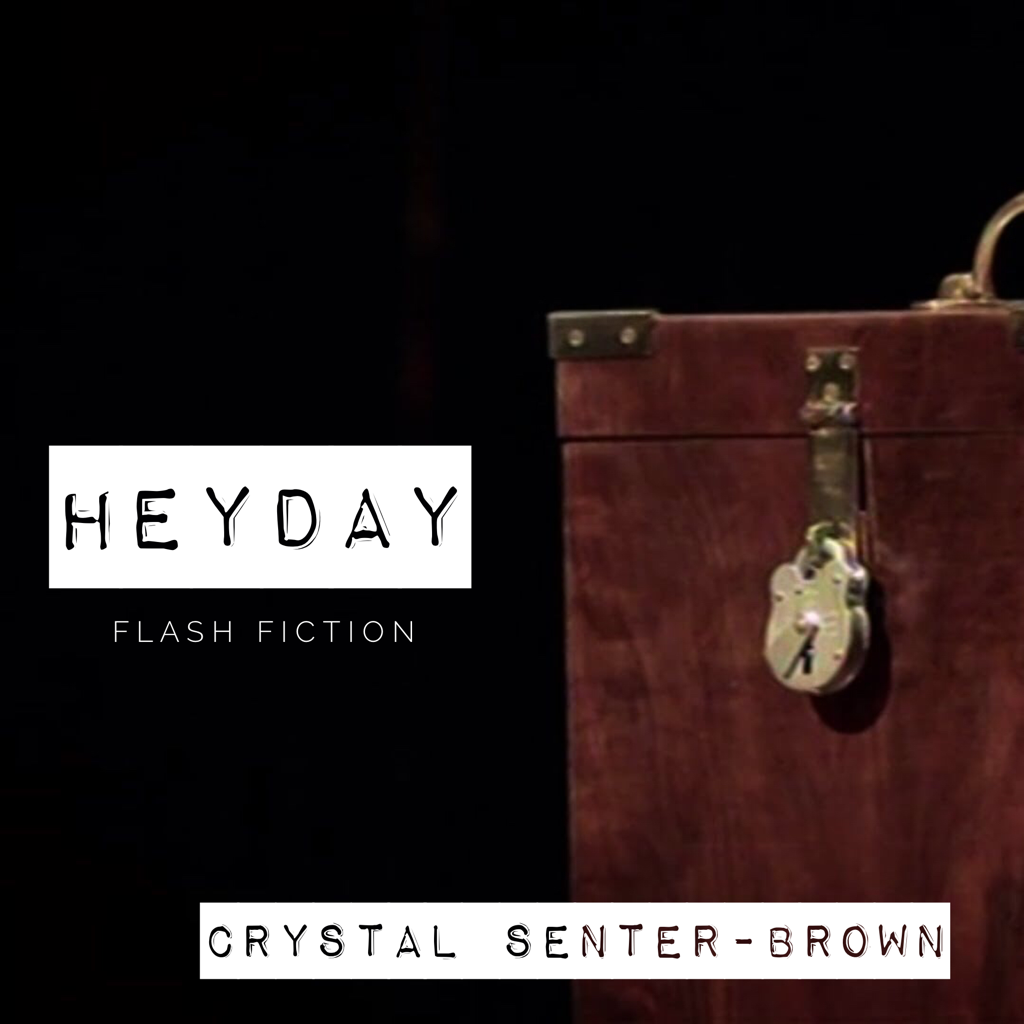 While the rest of the my friends were preparing for summer vacation, I was standing on the front steps of my grandmother’s brownstone.

“I don’t even WANT TO BE HERE” I growled at my mother. Who would want to spend an entire week with their grandmother?

“She’s not feeling well, Bailey. Don’t you have any empathy?”

“I have plenty of empathy,” I said as I swung my guitar case over my shoulder. “But now I have to miss band camp because of her. How will I ever get better at the guitar if I don’t get the training I need?”

“There’s another camp in two weeks. Just do this for me, okay?” mom pleaded. Her tired eyes wore me down. I nodded my head as she turned her key in grandma’s deadbolt.

As soon as we stepped into grandma’s tiny apartment, the odor of mothballs and old cooking oil invaded my nose. “Why do all old people's houses have to smell so weird?” I said as I covered my nose.

“Hush,” mom mumbled under her breath. “Mom? Mom?” she called out as we made our way down the narrow, dark hallway.

“Back here!" grandma responded from her bedroom.
“Is that my namesake? ” grandma said as I stepped into her room. “Well, Bailey, you’re growing into such a handsome young man!”
I walked over to grandma and lightly hugged her. Grandma held me at arm’s length and looked me up and down.
“You look just like your grandfather as a young man. Do you remember him?” I nodded, eveb though I didn't.

“And what’s that behind your back? Do you play guitar, too?”
I nodded again.
“Are you any good? I used to play back in my day. Your grandfather could hit a lick or two as well,” grandma said as she laughed.

“Yeah, I’m missing band camp this week because we had to...well, because we came to visit.”

“Now Anitia, why would you make him
miss his camp on account 'a me? You know I’m doing just fine…I just needed to rest, that’s all.”

Mom stepped in front of me. “Mama, Bailey is going to another band camp in a few weeks, so he’ll be fine. Besides, how often do the three of us get to spend time together?”


“So did you look at the brochures I sent you, mama?” Mom asked grandma as we ate dinner later that evening.
“Those old-folk places? Now you know I am NOT going to go into a nursing home. I’m just fine here!”

“They’re not nursing homes, Mom! They’re assisted living facilities! You’d still have your own apartment and you’d be able to share meals with other people. Maybe you’d make some new friends!”

“I don’t need no friends,” Grandma said as she took a bite of her chicken. “Besides, my nurse’s aide makes all my meals for me here.”

Mom was silent for a moment. “But I’m afraid that…”
“That what? I’m gonna die? Honey, we’re all gonna die.”
“No, that’s not what I mean. I would just hate for something to happen to you and no one would be able to help you. Would you at least consider the life-call wristband I bought you?”
Grandma sighed and pulled up her sleeve to reveal a shiny, metal wristband.
“You’re wearing it! I didn’t even know! Thank you, Mama. That makes me feel so much better!”
Grandma patted her mouth with her napkin and looked over at me.
“You barely touched your food, Bailey. You don’t like fried chicken?”
“I’m a vegetarian, Grandma,” I said.
“More like a junkfood-aterian,” Mom said as she began to clear our plates. “He eats more chips and candy than he does vegetables."
“Don’t give him a hard time”, Grandma said. “You ready to play me a tune? Go get your guitar.”
“It’s right here,” I said as I pulled my guitar from underneath my chair. “What do you want to hear?”
“Do you have anything original?” Grandma asked.
“Of course! I’m gonna be famous one day!” I said as I began to strum my favorite song “Come My Way”.
As I played, my grandmother began to sway from side to side. At first I sang the song softly, but as grandma’s smile widened, my voice began to rise.

​Come on girl,
I know you want me
I can see it in your eyes
that you are feelin’ me
The way you lookin’ in those jeans
is the stuff that makes sweet dreams
so won’t you come and take my hand
and dance with me


As soon as I finished playing, grandma applauded.
“Oh, Bailey! You have such talent! Anitia, why didn’t you tell me before now that we have another musician in the family?”
Mom began to clear the dishes from the table. “Because he’s only been playing for a few months. And before this, it was the drums. And before that, it was the saxophone. And before that…”

“Now, now,” grandma said as she patted my arm. “We can’t all be as focused as you are, dear,” she said to my mom as she winked at me. “Besides, he’s only sixteen. You surely didn’t know what you wanted to do with your life when you were sixteen. In fact, I seem to remember a little pig-tailed teenager who went from wanting to be an astronaut one day, to wanting to join the circus.”

I laughed. “The circus? Mom, really?”
“I was going to be an acrobat, I’ll have you know. It was a silly dream, but a dream nonetheless. But my father put a halt on that as soon as the words came out of my mouth," my mom said.
Grandma was silent.
“Why?” I asked.
“Your grandfather was a very serious man, Bailey,” grandma said. “He never went to college, so he worked two jobs for over forty years in order for his girls to have the very best education. That’s why your mother is the CEO of her own company now!”
Mom nodded. “You’re right, mama. But sometimes I wonder...what would have happened if…”
“If you actually joined the circus?” I asked as I laughed again. But the serious look on my mother’s face stopped my laughter.

“No, silly. I mean if I had been able to dream. At least a little.”
“What do you think you would have done? You don’t think you would have started your company?”
Mom sighed. “I don’t know. But I guess I’ll never know now, huh?” she said as she carried the last stack of dishes to the kitchen.
~*~


The next morning, I was awakened by the sound of hammering in the kitchen. When I came downstairs, I saw grandma sitting in her chair while my mother spoke to an older man and a young woman who were dressed in overalls.
“Take it all away,” she said. “Everything. I want to paint the walls white and I want someone to come in and scrub these floors.”
Grandma was silent.
“And clean the cabinets out too. There’s food in there from ten years ago!”
As the workers began, mom turned back to me. “Hey Bail! You finally decided to wake up? It’s almost 9 am.!”
“It’s also summer break, Anitia!” grandma said as she stood up. “I didn’t raise you to be so uptight!”
“Are you serious? You used to make me get up at 6 a.m., even on the weekends!”
Grandma nodded. “Yes, because I needed help around the house.”
“You needed help? Or daddy just didn’t want to raise lazy kids?” mom asked.
“A little of both, I suppose,” Grandma said. “Now I know you think you’re doing me a favor by cleaning up, but I’m going to ask you to please respect my wishes of not going into my bedroom. That room is mine, and I have some things in there I’m not ready to share with you just yet.”
“Things like what, grandma?” I asked.
Mom turned to grandma and raised her eyebrows.
“Never you mind that. Just do as I say. It’s my room. So it’s off limits.”
“Yes, ma’am,” mom said.

As the men continued working, I walked down the hallway to my grandmother’s room. The door was open a little and I could see inside through the crack. I took my foot and pushed the door open slowly. I looked back to make sure Mom and grandma were still talking before I stepped into grandma’s room.


It looked like any other bedroom. The wallpaper was peeling and grandma’s bedspread looked like it was from the seventies, but aside from that, it looked normal. I didn’t see any mysterious boxes or packages. At least not at first.
I walked over to grandma's walk-in closet and looked around. Her closet was a mess! Her dresses were barely on the hangers and her shoes were just thrown into the bottom of the closet. How does she live this way? I asked myself. I pushed the shoes aside and looked to see if there were any boxes behind them.


As I stood up, two boxes tipped over from the top of the closet and landed on the floor. The boxes were taped shut and had my grandfather's name written neatly on each top.

​Were these the "things" my grandmother didn’t want my mother to see?